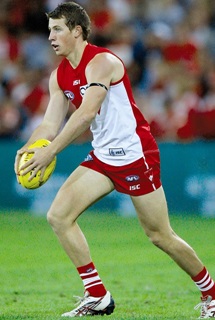 He was recruited by the club with pick 93 overall in the 2012 Rookie Draft, before being promoted to the senior list in 2012. Elevated from the rookie list prior to the 2012 season, Cunningham made his debut in the inaugural Sydney Derby, Round 1, against Greater Western Sydney.

In Round 15, 2014 Cunningham was awarded a nomination for the 2014 AFL Rising Star for his efforts against the GWS Giants.